Union Home Minister Amit Shah met the families of four martyred jawans of Jammu and Kashmir Police at Raj Bhawan in Srinagar on the evening of October 4, and presented them with job appointment letters. In all, he gave appointment letters to the kin of 24 martyred Jawans.

The letters were given to – Vishal Sharma, Pervina Bano, Halima Akhtar and Bilal Ahmad Najar. Union Home Minister Shah is on a three-day visit to Jammu and Kashmir. 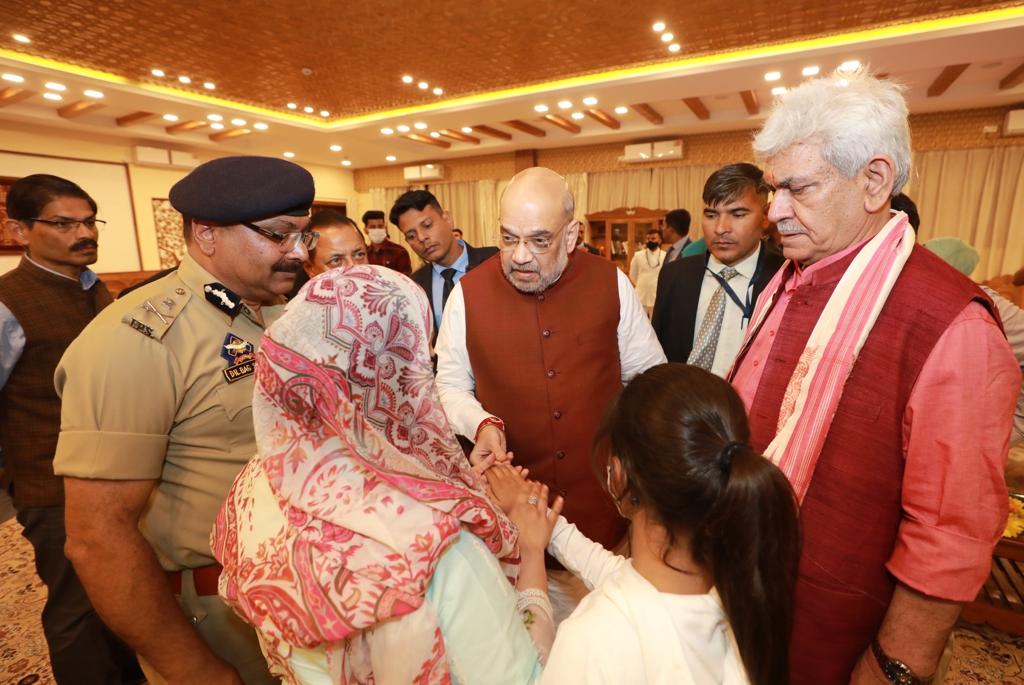 In a major announcement for the Gujjars, Paharis and Bakarwal communities, addressing a rally in Rajouri on Tuesday, October 4 he said that the Prime Minister laid the groundwork for the reservation of numerous communities in J&Ok after the abrogation of Article 370.

Addressing a public rally in J&Ok’s Rajouri, Amit Shah said, “My Pahari brothers came (here), Gujjar-Bakarwal came (here). I want to ask them, Were you not facing injustice? Earlier, did you get a reservation?”

J&Ok | After the abrogation of 370A, the process for reservation has been cleared. Justice Sharma’s commission has sent the report and recommended reservation for Gujjar, Bakarwal and Pahari communities and it will be given soon: Union Home Minister Amit Shah, in Rajouri pic.twitter.com/LrfJYWC5xG

He further said that post Article 370 abrogation, Justice Sharma commission was constituted and he recommended reservation for the Gujjar, Bakarwal and Pahari Communities in his report. Further, he said that as soon as the administrative process of accepting these recommendations is completed, the Pahari, Gujjar and Bakarwal communities will get the reservation benefits.

Amit Shah tears into the ‘3 families’

In a frontal attack on the opposition, Shah attacked the three families – Muftis, Gandhis and Abdullahs for looting Jammu and Kashmir. Amit Shah stressed, “Three families ruled Jammu and Kashmir for 70 years. They construed democracy as their families. Did you ever get the right to Gram Panchayat, Tehsil Panchayat and Zilla Panchayat? They deciphered the meaning of democracy that only the children of my family should live in peace and rule for decades. The government at the Centre changed. In 2014, Narendra Modi became the PM. First, he conducted Panchayat elections and after 2019, he conducted Tehsil Panchayat and Zilla Panchayat elections. What was earlier in the hands of three families is now in the hands of 30,000 people.”

Iran’s World Cup fans: ‘Football is meaningless when children are being killed’

BOK Hikes Interest Rate by Another 0.25%

Is Altcoin Season in December? These Altcoins May be the Best Bet For Traders

Your Go-To Guide for Streaming New and Classic Holiday Movies