When a young, lanky man, accompanied by a friend, walked into the office of Ok.A. Abbas to ask for a film role, the director liked what he saw. He was tall and there was something in his eyes, he wrote. “They were beautiful.”

Abbas offered him a role right there, told him the conditions – just Rs 5,000 for the whole film, and everyone slept on the floor in a guest house. The boy agreed. But when Abbas found out his name, or rather surname, he said he would have to seek the permission of his father, “my friend Dr Bachchan.”

The permission duly came and Amitabh Bachchan joined the film as one of the Saat Hindustani. Around the same time, he also got signed up as a deaf mute in Sunil Dutt’s film Reshma and Shera. Less known is the fact that he was also a pall bearer in one scene in a film, which, when Shashi Kapoor got to know, he got it cut out.

With that not particularly glorious or high-profile start, Bachchan came to dominate the Hindi film industry, and as he turns 80 years old today, he is still at it – acting, modelling and doing quiz shows on television. In between, he has been a businessman and also sung in music videos. It has a continuous run of almost 60 years, which is unprecedented not just in India but anywhere.

During this span, he has battled with a life-threatening disease, a business that spectacularly failed and brought him to bankruptcy, accusations of secret accounts abroad and of course, the many flops that went along with the hits. His career stalled when his kind of films began to fail and newer, younger stars emerged on the scene.

Also read: The Discreet Charm of Being Amitabh Bachchan

But he bounced back from all these setbacks and came back spectacularly as the host of the quiz-show, ‘Kaun Banega Crorepati’, bringing his baritone and presence to the small screen and seemingly rising above its limitations. Television was looked down upon by the other stars, who saw themselves as too big; once Bachchan did it, the others rushed in, but not one could replicate his success.

Bachchan brought an engaging and warm persona to the show, talking to the participants as a friend, with no starry airs whatsoever. The star was very much present of course, as the sheer awe on the faces of the contestants showed, but he was not being superior or smart-alecky; that seeming lack of fake self-awareness (though he is no less conscious of his status) came through on the screen, and soon the show became a phenomenon. Bachchan’s career picked up again and is still going strong. 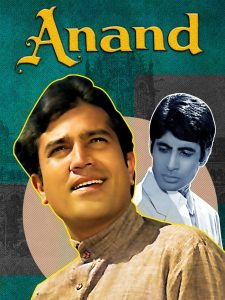 A poster for ‘Anand’.

That resilience has kept him going from the beginning. His first few films, in which he was either the villain (Parvana) or the brother of the heroine (Gehra Daag) didn’t create many waves, at least for him. Rajesh Khanna was the reigning divinity in the pantheon of the stars, with a continuous string of superhits. Bachchan was just another hopeful.

The two came together in Anand, where the quiet but intense Bachchan as Dr Bhasker was the perfect foil for the exuberant Khanna, and he was noticed.

Next year, in 1972, Bachchan played the lead in Bombay to Goa, using his lanky frame to full advantage, bashing up villains and henchmen with his long limbs. The film and its hero were noticed, and the leading writers of the time, Salim-Javed, recommended him to Prakash Mehra who was finding it difficult to convince other stars to act in his film.

Zanjeer became a box office success and Bachchan’s simmering-with-rage Police Inspector branded him the ‘Angry Young Man’. More roles in that vein followed, Deewar being the best, where he played a poor boy who joins the smugglers and becomes rich, in the process losing the respect of his mother and his cop brother who is out to arrest him. Namak Haram came out along with Zanjeer and pitted him against Rajesh Khanna again; this time the honours were even.

The 1970s were his best decade. The line of producers outside his door lengthened. Bachchan was signing all kinds of films, a few of them turning out to be duds, but he was unstoppable. In between, he showed a penchant for light-hearted, comedic roles (Chupke Chupke), in which he displayed impeccable timing.

Sholay turned out to be a huge box office success as was Kabhi Kabhie, in which he played the sensitive poet who loses the girl. And of course Don, in which the punters got not one but two Bachchans. He summarily despatched Khanna from the scene and was now acknowledged as a ‘one-man industry’, filling the top spots from one to ten.

A collage of posters of Amitabh Bachchan’s best known movies.

Not everything he churned out was in anyway memorable. Only the hard-core fan will remember a Parvarish or Ganga ki Saugandh. But every now and then came one film that established his supremacy and showed his sheer versatility.

In 1976, Manmohan Desai, the king of the masala genre, who threw all the elements – humour, fight scenes, good songs and, his staple ingredient, highly unlikely coincidences – to create that perfect entertainer, released Amar Akbar Anthony. Audiences loved it, especially Bachchan’s turn as a street-smart Catholic boy Anthony Gonsalves who speaks in a typical Bombay patois, mangling Hindi along the way.

More followed with Desai – it was during the making of one, Coolie, that Bachchan was hit by Puneet Issar and fell on the sharp corner a table. He was rushed to the hospital in Bangalore and then taken to Bombay where his life hung in the balance for many years. Indira Gandhi flew down to see him and every day, crowds gathered outside the hospital to pray for him. He came out of it, with Myasthenia Gravis, an auto-immune, neurological disease that weakens the muscles.

Also read: Amitabh Bachchan, A Colossus And A Master Of Reinvention

The Gandhis and the Bachchans had been friends for years and after Indira Gandhi died, Rajiv gave him a Lok Sabha ticket for Allahabad, where he roundly defeated H.N. Bahuguna. Bachchan found politics a ‘cesspool” and quit as an MP, but his close links continued and he was named as one of the beneficiaries of the Bofors commissions, which were allegedly held in an account in St Kitts.

Bachchan sued the papers that made the allegations, won and later his name was cleared. But soon, the two friends fell out and Bachchan later got closer to political fixer Amar Singh and industrialist Anil Ambani. Along with Sahara boss Subrata Roy, they are said to have helped him when his company, Amitabh Bachchan Communications Limited (ABCL), failed.

The one characteristic of Bachchan is his discretion – he never lets anyone break through his guard and is said to give boring interviews. (This is not strictly true, because he can be an engaging conversationalist during interviews, as this writer has discovered). But once in a while, a remark slips through, as it did when he answered a question on a comment by Rahul Gandhi implying Bachchan and his wife, politician Jaya Bachchan, were liars, with “woh Raja hain, hum Runk” (they are kings, we are commoners).

By the 1990s, Bachchan was passe, his films flopping miserably and nothing substantial coming his way. Shah Rukh Khan, who reflected his times, the quintessential post-liberalisation hero, exuberant, travelling abroad with abandon, wearing designer clothes, and romancing the girl in different parts of Europe. The Indian moment had arrived and with it the man – who had time for anger or vigilantism?

Bachchan became unemployed, as filmmakers now made a beeline towards Shah Rukh Khan and his other two fellow Khans, Aamir and Salman. An era was seen as drawing to a close, till he was offered the chance to host the Indian version of ‘Who Wants to Be a Millionaire’. He took it and was back with a vengeance – his show reached more people every night than any film, and he was coming into people’s homes, making him very accessible to all. This also brought him to the notice of younger generations, who could now watch the show with their parents and grandparents. The new millennium had given him a new lease on life.

Since then, his film career has taken off, with roles as varied as a conservative patrician of a large, wealthy family (Kabhi Khushi Kabhi Gham); an alcoholic teacher of a handicapped girl who is visually impaired (Black); a cantankerous old hypochondriac with an unhealthy obsession with his bowel movements (Piku); and a miserly rent collector of his wife’s crumbling property (Gulabo Sitabo).

Parallel to this is his thriving career as a brand-endorser – his persona as a elegant, trustworthy elder with mass appeal has been used for products as varied as cement, jewellery and noodles, apart from his public service ads for the polio vaccine and Gujarat tourism. His fee for commercial products is said to be stratospheric, not bad for a man at this stage of his life.

At the same time, a transition has subtly taken place in how he comes across, from the angry young man of the rebellious 1970s to the conservative paterfamilias of the pre- and post-Modi era. He is now an upholder of family values, not someone who wants to smash the system; a status-quoist who is completely in tune with how India has shaped up. Like in his films, one can readily imagine him leading the family prayers; he is known to walk barefoot, for miles from his home to the Siddhi Vinayak temple in the pre-dawn hours.

No amount of controversy – the Mahanirman Sena attacking him, or even his name cropping up in the Panama papers of secret account holders abroad, can dent his appeal. The roles still keep coming in, the young directors, probably fulfilling the fantasies of their own childhood of watching his films, still make a beeline towards him. The films are indifferent to mediocre, and a still younger generation of stars has emerged; but Bachchan, like old man river, still keeps rolling along.

Apart from his undoubted talent – who else can emote, fight, dance, sing and make audiences laugh and cry – is his ability to reinvent himself and transform himself in consonance with the times. Each new generation has seen another side of him, from star, to TV host, to brand ambassador and the father-figure who has no qualms acting with younger stars. His name may not pull in audiences by itself, but his commands respect, both of his peers and of people in general, though some of that sheen has got dented over the years.

His has been a familiar presence in our lives, especially for those who were around when his first films were released.

Some years ago, during a chat with this writer, he was asked why he was still popular; didn’t it surprise or please him? “I am a regular worker; I get up in the morning and head to work like everyone else. As long I am employed, I will go, when it stops, I will stay at home.”

A bit over-modest, but not untrue. And the way things are going, it doesn’t look like that day will come any time soon.

DealShot: 14 Deals Worth $140 Million With SDIC Venture Capital, Panacea Venture And Others

All These People Experienced Super Creepy “One In A Million” Moments, And I Have Questions