Nothing is left to chance in the first large-scale investigation of indigenous raccoon dogs that have become common inhabitants around residential complexes in some outlying areas of Shanghai.

Testing was carried out recently in 51 residential compounds in Songjiang District.

“We want to convince residents that wild animals living in the city are not a threat to life or health, and nothing shows that better than statistical evidence,” said Wang Fang, a researcher with Fudan University’s School of Life Sciences and team leader of the investigation.

There are an estimated 3,000-5,000 raccoon dogs in Shanghai. The animals, named for their mask-like face markings, are not related to raccoons or dogs. They are most closely related to foxes. 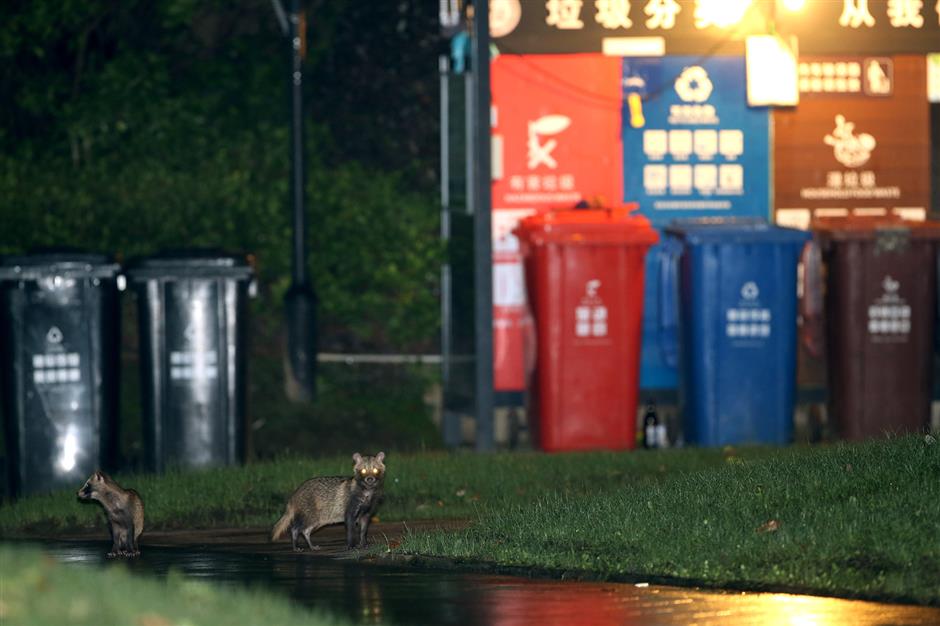 Raccoon dogs often appear near trash bins, where they scavenge for kitchen waste at night.

When Wang first learned about them in Shanghai in 2013, he realized they needed protection. Six years later, when he returned from the United States and joined Fudan University, he found the situation had changed beyond expectations and raccoon dogs needed proper management, not protection.

“I visited residential compounds and was surprised to discover that raccoon dogs had fully adapted into urban life after moving from fields into cities,” Wang said. “They took advantage of drainage and ventilation openings and scavenged for food in trash cans. They were not afraid of people anymore.”

At the time, Wang foresaw conflicts developing between raccoon dogs and residents in about five years; the coronavirus pandemic hastened the showdown.

“After all, cities are not natural reserves,” he said. “We have recorded several conflicts since 2020. Harmony between humans and wildlife is an enduring task in metropolises like Shanghai.” 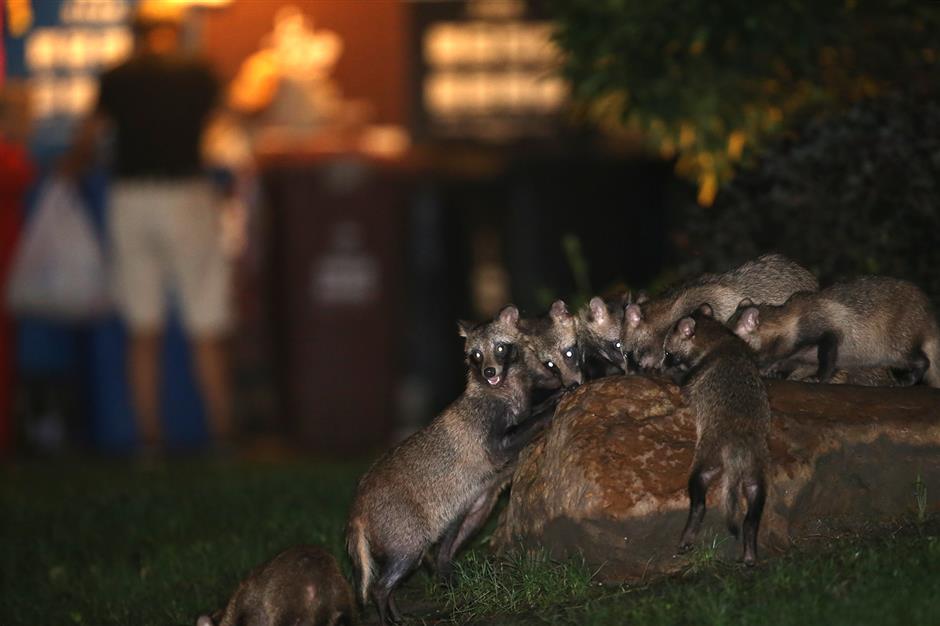 A family of raccoon dogs feasts on food found in a residential area, undeterred by people nearby.

For the past three years, questionnaires were distributed to more than 1,000 residents to gauge public attitudes toward wild animals living in their midst.

The result showed only 13 percent of residents were hostile towards wildlife, but 70 percent worried that the animals might spread disease.

Hence the coronavirus testing of the raccoon dogs. The results? All negative. Rabies tests were also done. Also all negative.

Some 150 “citizen scientists” served as volunteers during the mass investigation into raccoon dogs. Their participation gave them a deeper understanding about the co-existence of humans and wildlife.

The volunteers’ enthusiasm surprised Wang. Worries that recruitment might be difficult dissipated when 300 resumes flooded in. Some 70 percent came from women and 70 percent were under 40 years of age. The volunteers came from all walks of life, including engineers, lawyers and computer programmers.

“The residents were eager to express themselves on the issue,” Wang said. “They suggested that we make documentaries on raccoon dogs or include content about them in school textbooks.”

He said the investigation team was, at first, hesitant to involve children because most surveys were done after dark. But it turned out that children took the task more seriously than adults.

“Children weren’t afraid of going into bushes to look for traces of raccoon dogs,” he said. “Additionally, they were very reliable about facts and numbers. So eventually families with children became among our best volunteers.” 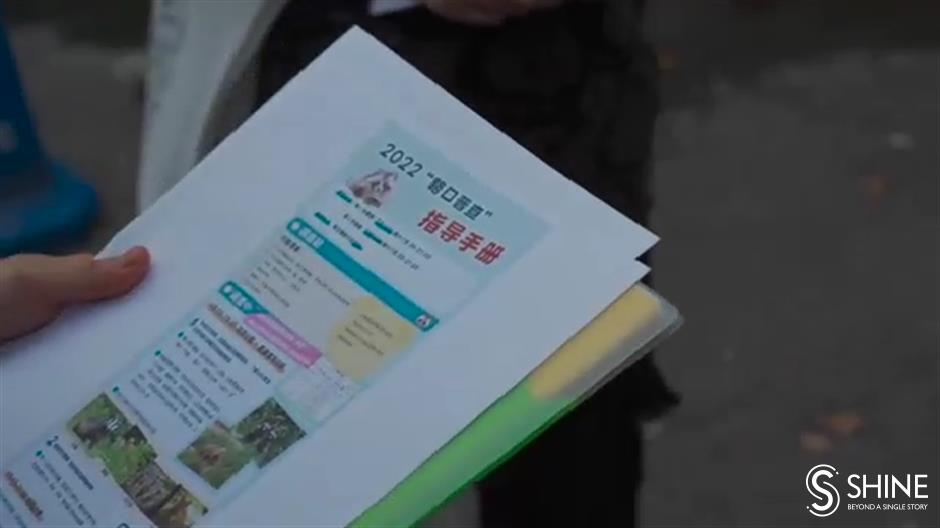 “Citizen scientists” who volunteered to help in the raccoon-dog project received printed guidelines on what to do.

Helen Lu and her 13-year-old son were among them. Lu and her family often see raccoon dogs around their residential compound in Songjiang.

“The investigation gave us more knowledge about these animals that co-exist with us,” Lu said. “It was interesting. When food and water are put out for them in empty takeaway boxes, the animals turn the boxes upside down after eating.”

As a “citizen scientist,” Lu said she thinks that dispelling misconceptions is the best way to create a harmonious environment between humans and urban wildlife.

“Apart from raccoon dogs, we have hedgehogs, squirrels and yellow weasels around our compound – and lots of birds, too, such as egrets and spotted doves,” Lu said. “I often share information about wildlife with my neighbors. Our compound now has posted slogans telling people how to deal with wildlife encounters. This is big progress.” 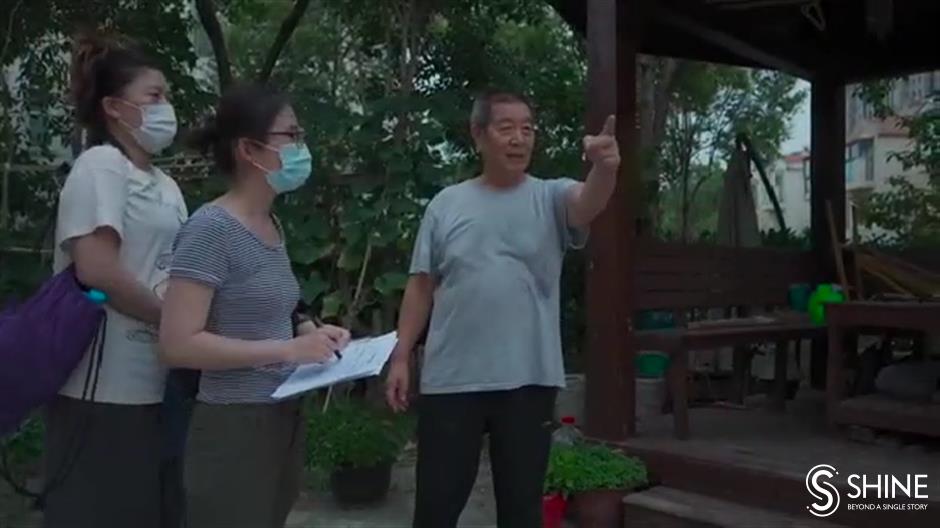 A resident in a Songjiang District compound points out to project volunteers where raccoon dogs are frequently seen.

At the moment, raccoon dog are probably the most frequently seen wild mammals in Shanghai. Other indigenous species tend to avoid humans. Badgers are sometimes too aggressive in trying to protect their territories. Leopard cats haven’t been spotted in the past two decades. Wild water deer, once extinct in the Yangtze Delta region, have been reintroduced in forest parks but shy away from the urban bustle.

But scientists have their eye on two other species which may emerge as intrusive urban wildlife in the future. One is the small Indian civet, which has been spotted in Yangpu District recently. The protected animal is not regarded as a typical city species. The civets usually live in trees or stone caverns, feeding on rats, frogs, snakes, insects and fruit.

At least two small Indian civets were captured on infrared cameras in Yangpu, but it remains a mystery where they came from. 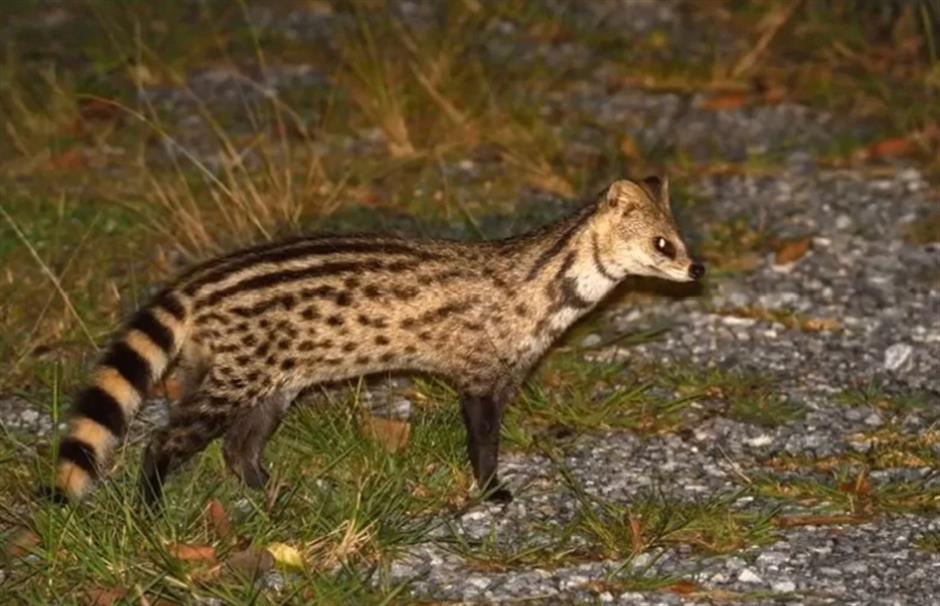 A small Indian civet is captured on camera in Yangpu District. The mystery is how it got there.

The other species is the red-bellied squirrel, which has been found to be changing its behavior to adapt to city life.

“Red-bellied squirrels usually live in trees and need vast woodland to survive,” Wang said, “but in recent years, we have found them venturing into residential areas and searching trash bins for food, stealing vegetables from people’s gardens or even breaking into balconies for stored rice and nuts. Maybe we’re going to face a human-squirrel conflict in the future.” 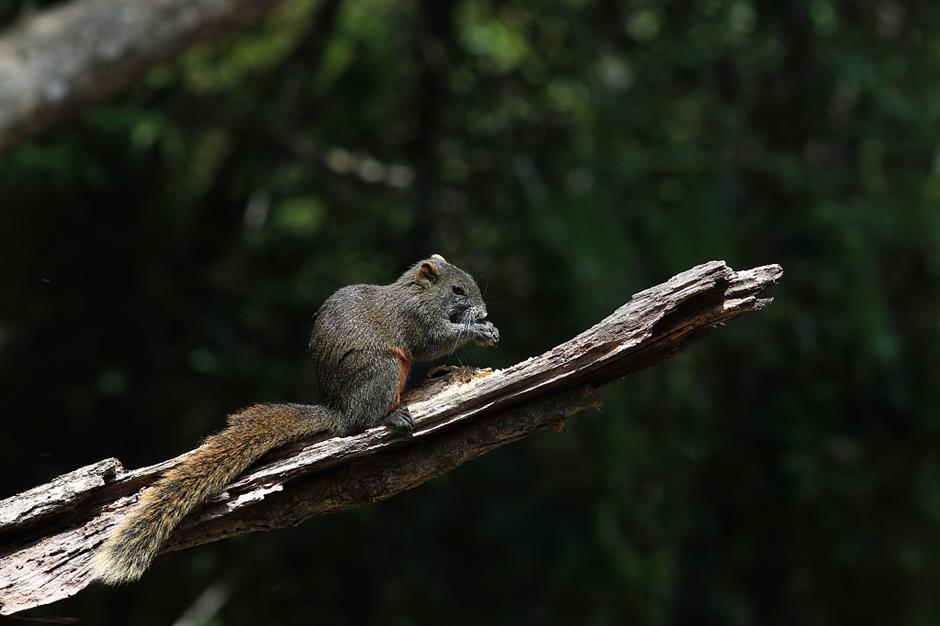 Red-bellied squirrels are easily adapting to urban life. Will they become the next neighborhood flashpoint in humans vs wildlife?

Wang said behavioral studies on urban wildlife, which are very important in developing management strategies, may be extended to animals beyond raccoon dogs in the future.

“We have designed experiments to see how brave and adventurous raccoon dogs usually are,” Wang said. “For example, we want to see if they will venture into seemingly ‘dangerous’ places if food sources attract them, or if they would be scared away by the feces of tigers or wolves – typical warning signs in nature. We need to prepare for the future, when their population expansion near schools or kindergartens might cause certain threats to children.”