BOISE, Idaho (AP) — The DNA of the man accused of killing four University of Idaho students was found on a knife sheath recovered at the crime scene, and cellphone data shows that he was in the area of the victims’ home multiple times in the months before the November attack, an investigator said in court documents unsealed Thursday.

The documents were made public minutes before Bryan Kohberger, a 28-year-old criminology doctoral student at nearby Washington State University, appeared in court to face four charges of first-degree murder. He was ordered held without bail.

The court documents also detail a surviving roommate’s chilling encounter with a masked intruder the night of the stabbings. But the documents still leave many questions unanswered, including whether Kohberger and the victims knew each other and why police weren’t called to the home until nearly eight hours after the killings likely occurred.

According to the newly unsealed court documents, traces of DNA from a lone male later determined to be Kohberger were found on the button of a leather knife sheath found in the rental home where the victims were killed. Investigators later closely matched the DNA on the sheath to DNA found in trash taken from Kohberger’s parents’ home in Pennsylvania, where he was arrested last week.

The sheath had a U.S. Marine Corps insignia on it, though there’s no record of Kohberger having served in the military.

Two other housemates were at home during the Nov. 13 killings, but were not physically harmed, according to the affidavit written by Brett Payne, a police corporal in Moscow, Idaho.

The attack that occurred in the early morning hours at the off-campus home had spread fear throughout the university and surrounding area for weeks, as authorities seemed stumped by the brutal stabbings. Investigators recently made a breakthrough, however, after analyzing DNA evidence and searching for a white sedan that was seen around the time of the killings.

Surveillance footage captured near the home showed a white sedan — later identified as a Hyundai Elantra — drove by the home three times in the early morning hours of Nov. 13, returning a fourth time at about 4:04 a.m. The car was next spotted on surveillance cameras leaving the victims home 16 minutes later “at a high rate of speed,” according to the affidavit. The same car was later spotted on a different camera headed toward Pullman, Washington — the town where Washington State University and Kohberger’s apartment are located.

Latah County prosecutors have said they believe Kohberger broke into the victims’ home intending to commit murder. But investigators have made no public statements about a possible motive, whether any weapons have been found, or whether they think Kohberger knew any of the victims: Kaylee Goncalves, 21; Madison Mogen, 21; Xana Kernodle, 20; and Ethan Chapin, 20.

Kohberger was extradited Wednesday from Pennsylvania, where he was arrested last week at his parents house.

One of the uninjured housemates told investigators that she was woken by noises at about 4 a.m., and thought she heard another housemate say something like, “there’s someone here.” She looked outside her bedroom and didn’t see anything. Later she thought she heard crying coming from Kernodle’s room and looked outside again. That’s when she said she heard a male voice say something to the effect of, “it’s OK, I’m going to help you,” Payne wrote in the affidavit.

She later opened her door a third time and saw a masked man in black clothing whom she did not recognize walking toward her and stood in “frozen shock” as he walked past her toward a sliding glass door, the affidavit said. She went back in her room and locked the door.

Investigators believe the suspect then left the home. The document does not say what happened next at the home, or why police were not alerted for several more hours.

READ:  Bryan Kohberger's Server Reveals What Was Memorable About His Order—Reports

Mental health experts say common physiological responses to frightening or traumatic experiences include an urge to fight, an urge to flee, or an urge to freeze.

Location data from Kohberger’s cellphone showed he had traveled to the area of the victims’ residence at least a dozen times between late June and the night of the killings, authorities said.

Those apparent visits to the victims’ neighborhood all occurred late in the evening or early morning hours, the affidavit said. Investigators also obtained location data from the night of the killings, showing that Kohberger’s phone was near his home in Pullman until about 2:42 a.m.

At that point, the phone began taking a roundabout route back to Pullman, traveling south to Genesee, Idaho, then west to Uniontown, Washington and north to Pullman just before 5:30 a.m. — around the same time the white sedan showed up on surveillance cameras in town.

An FBI expert identified the vehicle as a 2011-2016 Hyundai Elantra; Kohberger was driving a 2015 white Elantra during traffic stops in August and in October, the affidavit said.

Kohberger had applied to become an intern with the Pullman Police Department sometime in the fall of 2022, writing in his application essay that he wanted to help rural law enforcement agencies collect and analyze technical data in public safety operations, according to the affidavit. The document does not say if Kohberger was granted the internship.

The Pullman Police Department did not immediately respond to a message from The Associated Press asking if Kohberger ever became an intern with the department.

During his first appearance in the Idaho courtroom Thursday, Kohberger appeared with his attorney in an orange jumpsuit and remained silent while the magistrate ordered him not to have contact with the victims’ families. His next hearing was set for Jan. 12.

Before Kohberger was extradited to Idaho, his attorney in Pennsylvania — Monroe County chief public defender Jason LaBar — said Kohberger was eager to be exonerated and described him as “an ordinary guy.”

Although Moscow police have been tightlipped about the investigation, authorities last month asked the public for help finding a white sedan that was seen near the scene of the crime — specifically, a 2011-2013 Hyundai Elantra. Tips poured in and investigators soon announced they were sifting through a pool of around 20,000 potential vehicles.

Meanwhile, Kohberger apparently stayed in Pullman, Washington, through the end of the semester at WSU. Then he drove across country to his parents’ home in Pennsylvania, accompanied by his father. They were in a white Elantra.

While driving through Indiana, Kohberger was pulled over twice on the same day — first by a Hancock County Sheriff’s deputy and a few minutes later by an Indiana state trooper.

This story was corrected to delete a reference to a knife being found at the crime scene and to clarify that the U.S. Marine Corps emblem was on the sheath that was found.

Stay up to date on all the latest news from Boston.com 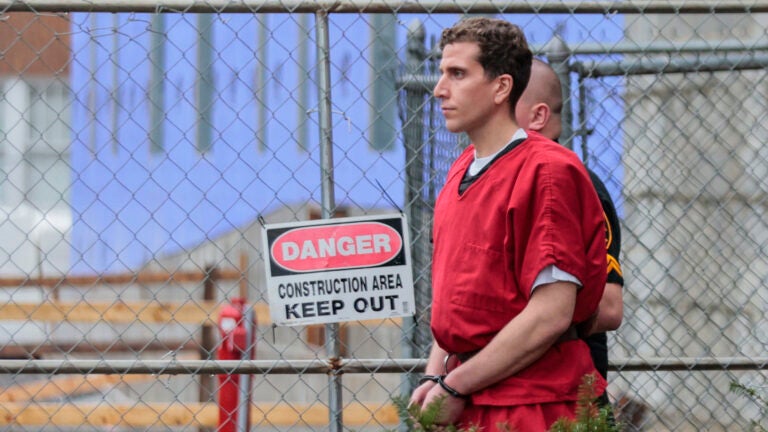