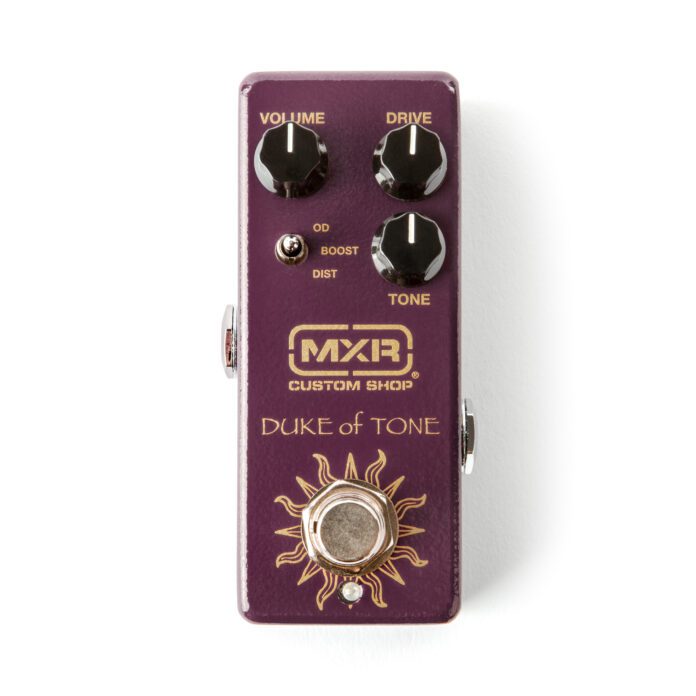 Benicia, CA — September 1, 2022 — Designed in conjunction with indie pedal company Analog Man, the MXR Duke of Tone Overdrive is for players who want to add a touch of warmth and grit to their rig while allowing the natural tone and feel of their high-end gear to shine. Based on the highly coveted Prince of Tone Overdrive, the single-channel version of the Analog Man’s King of Tone Overdrive, this pedal is a vintage connoisseur’s dream come true.

“When I was contacted by Dunlop for a collaboration,” says Analog Man proprietor and pedal builder Analog Mike Piera. “I drew out the schematic for how I wanted the Duke of Tone Overdrive to be. They listened to me, and they used pretty much all of the parts I wanted. I don’t think they ever said, ‘no,’ so I was really glad that all of the components that are used for audio are full-sized, good-sounding thru-hole parts. Audio-quality parts. And I tested them very carefully to make sure that they’re the same sound.”

The resulting MXR Duke of Tone Overdrive delivers the same experience offered by its brethren—a warm-yet-clear-and-open sound that allows all of the nuances of your signal chain to come through, from your individual guitar strings to the dynamics of your amp’s tubes. And it all comes in an MXR mini housing.

“I was very happy working with them. The reason being to get them out to the stores because we don’t really have our pedals—especially the King of Tone and Prince of Tone Overdrives—we don’t have them in any stores because we can’t make them fast enough for our normal customers. I thought it would be great to get these to dealers all over the world with the same basic sounds, a nice, small, compact size, and the tone is all there. You don’t need to have something big to have good tone.”

Get the full story here:

The MXR Duke of Tone Overdrive is now available for preorder at $149.99 street from your