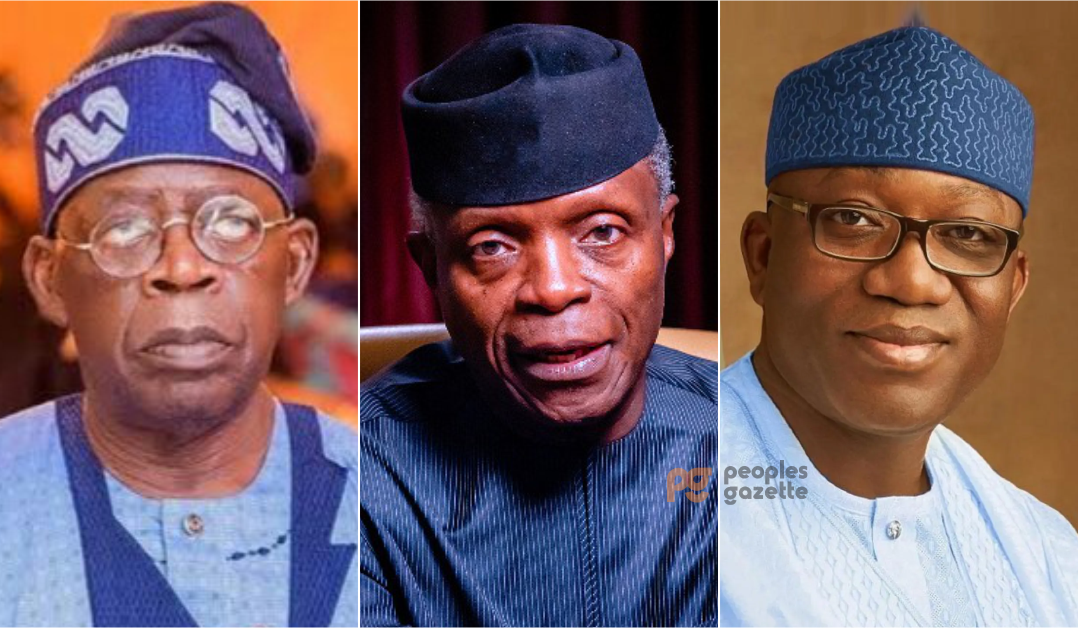 Leaders and aspirants of the South-West caucus of the ruling All Progressives Congress have streamlined their options for the region’s consensus preference to three aspirants, Peoples Gazette can report based on information from people familiar with the development.

The leaders urged four aspirants to step down in a meeting that was held at the residence of Olusegun Osoba in Abuja between 10 p.m. Saturday and 1: 00 a.m. Sunday.

The Gazette heard that Senator Ajayi Boroffice, Tunde Bakare and Dimeji Bankole were categorically urged to step down due to their limited campaign activities for the top office. Senator Ibikunle Amosun was also asked to step down, although our sources could not immediately ascertain whether or not he acquiesced.

The aspirants who agreed to step down have yet to issue an official statement, and their respective spokespersons could not be reached for comments Sunday morning.

The outcome of the first round of talks has left Governor Kayode Fayemi, Bola Tinubu and Vice-President Yemi Osinbajo as the three standing aspirants from the South-West.

The meeting will continue at forenoon on Sunday, or much later, depending on how events unfold, our sources said. Our sources spoke under anonymity because they were not asked to go on the record over the meeting’s outcome.

It came as President Muhammadu Buhari met with all aspirants and emphasised consensus as the best option for the party’s convention scheduled to begin on June 6 and terminate on June 9.

Besides the aspirants, the meeting also had in attendance Bisi Akande, Governor Rotimi Akeredolu, Gbenga Daniel, Governor Jide Sanwo-Olu, Mr Osoba himself, amongst others.