As rains continue to wreak havoc in different parts of Karnataka, Chief Minister Basavaraj Bommai on Wednesday said 32 people have lost their lives so far, and Rs 500 crore will be released immediately to restore the basic infrastructure that got damaged. 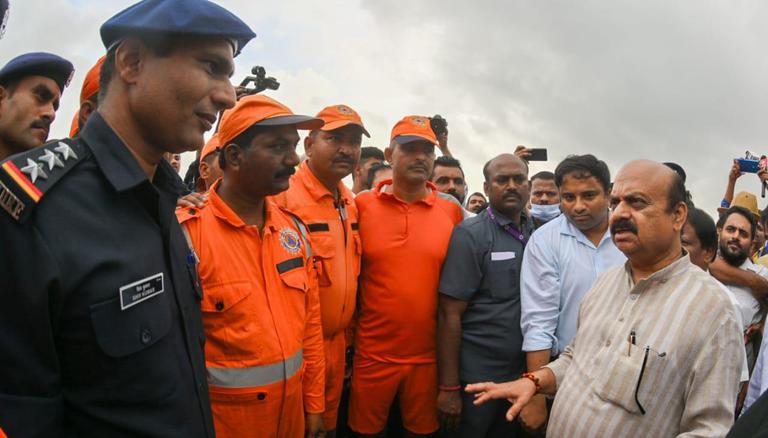 As rains continue to wreak havoc in different parts of Karnataka, Chief Minister Basavaraj Bommai on Wednesday said 32 people have lost their lives so far, and Rs 500 crore will be released immediately to restore the basic infrastructure that got damaged.

The CM is on a visit to rain and landslide-affected Kodagu, Dakshina Kannada and Udupi districts since Tuesday, and will be travelling to Uttara Kannada, Belagavi and other northern districts next week.

“Across the state, so far 32 people have lost their lives, five people are missing, 34 are injured, more than 300 people have been evacuated and saved, 14 relief camps have been set up, four NDRF and SDRF teams each are working to rescue people,” Bommai said.

Speaking to reporters after holding a review meeting with senior ministers and deputy commissioners of coastal districts in Udupi, he said a sum of Rs 500 crore would be immediately released to take up repair and restoration of roads, bridges, power lines and other infrastructure works in the flood-hit areas based on the report received from all the districts on the extent of losses suffered.

The Chief Minister said he is getting reports on estimates for damage from all districts, following which the state will request the Centre for relief.

Rains have increased this year in July, resulting in flood-like situation in coastal region, he said, adding, “Earlier there were some rains in May and June, in June it was average rainfall, but all of a sudden there was large-scale rainfall in the last 10 days, which has been above normal in coastal and some northern districts.” Rains have continued in several parts of Malnad and coastal Karnataka causing flood-like situation, also there have been several incidents of landslide and sea erosion.

Rivers in the region have swelled, several dams have reached the brim and there is severe waterlogging in agriculture fields and low-lying areas causing damage to crops and properties. Similar is the situation in adjoining districts of Shivamogga, Chikkamagaluru and Hassan.

Rains and increase in water level in rivers and dams is a cause of worry in a few northern districts of Belagavi, Vijayanagara and Yadgir.

Water is being let out through 15 crest gates at Yadgir’s Basava Sagara dam into Krishna river. The reservoir is receiving an inflow of about one lakh cusecs. People living along the riverside have been asked to vacate to safer areas.

With Vijayanagara’s Tungabhadra dam almost reaching its capacity and increasing water flow in the river, there are threats of some of the monuments at the heritage site of Hampi like Purandara Mantapa getting inundated, sources said.

The state government is providing immediate relief of Rs 10,000 to those whose houses have been damaged, Bommai said, adding that damage to houses has been categorised as A, B and C according to the extent of damage, and Rs 5 lakh is being provided as compensation for completely destroyed houses, Rs 3 lakh for partially damaged houses and Rs 50,000 for houses with less damage.

READ:  #ICYMI: Friends of Montreal Parks, 50 terrasses to visit, What the Puck

For horticulture crops, the Union government is providing input subsidy of Rs 18,000, while the state government is giving Rs 28,000 to help the farmers, Bommai said.

A solatium of Rs 4 lakh is being paid by the Centre to the families of those killed in natural calamities like floods, but the state government has raised it to Rs 5 lakh, the Chief Minister said.

Speaking about damages caused in Udupi, Dakshina Kannada and Uttara Kannada, he said among the dead, eight people are from the three districts, where crop loss is to the tune of 355 hectare, and 1,062 houses have been damaged.

Also, a total of 2,187 km of PWD and RDPR roads have been damaged there.

The CM said this time those affected and not coming to relief camp will be given dry ration kits.

Referring to frequent tremors in Kodagu and coastal regions, he said the Geological Survey of India, Universities of Bengaluru and Mysuru have been asked to study the phenomenon and submit a report. Appropriate measures would be taken based on the study report for the safety of the people.

A team of experts from Amrita University is studying the causes for landslides in Kodagu, and they have been asked to conduct similar studies in Dakshina Kannada, Udupi, Uttara Kannada and Malnad areas too, Bommai said, adding appropriate measures would be taken after getting the report.

Referring to the problem of sea erosion, the Chief Minister said though a programme to prevent sea erosion has been implemented with Asian Development Bank (ADB) funding of Rs 300 crore, the results are not satisfactory.

A ‘Sea Wave Breaker’ technology would be tried on an experimental basis along one km of the coast at Ullala, he said, adding it would be extended to the entire coast if found successful. “A plan to provide a permanent solution for sea erosion would be formulated in the next 2-3 months,” he said.

(Disclaimer: This story is auto-generated from a syndicated feed; only the image & headline may have been reworked by www.republicworld.com)