Jesse Powell objects to sanctions against Tornado Cash, but his exchange must comply with the law.

Powell argued in an interview with Bloomberg TV today that individuals “have a right to financial privacy” and said that many people are using Tornado Cash for legitimate reasons.

He also questioned whether the sanctions would survive a constitutional challenge, referring to Coin Center’s plan to take the Treasury and OFAC to court over freedom of speech.

However, Powell believes that the community response may be overblown. He said that, although the takedown of Tornado Cash’s GitHub code was unnecessary, he does not see these events as a sign of a wider attack on open-source projects.

Rather, he suggested that the sanctions were a “knee-jerk reaction” and a “hasty response” to TerraUSD’s collapse, adding that regulators overreacted with the intention of protecting the public.

Powell also confirmed that, despite his objections, Kraken will block transactions to and from addresses related to Tornado Cash addresses. “We would prohibit withdrawals to any addresses associated with Tornado and we would likely freeze any funds coming in from a Tornado address,” Powell told Bloomberg.

Powell’s opposition to sanctions is expected given his past resistance to excessive regulation. In February, he criticized emergency measures from the Canadian government that targeted crypto exchanges. That same month, he refused to freeze Russian accounts at the request of Ukrainian Vice Prime Minister Mykhailo Fedorov.

Powell is not the only crypto leader to criticize sanctions against Tornado Cash. Coinbase CEO Brian Armstrong and Circle CEO Jeremy Allaire have also criticized the sanctions on the grounds that they target a tool rather than a person or entity.

The U.S. Treasury first imposed sanctions on Tornado Cash addresses on August 8. One developer, Alexey Pertsev, was arrested by Duch authorities in the Netherlands on August 12.

Disclosure: At the time of writing, the author of this piece owned BTC, ETH, and other cryptocurrencies

Circle quickly complied with the U.S. Treasury’s decision to sanction Tornado Cash, but its CEO is calling on industry leaders to establish a privacy-enabling policy framework. Circle CEO Comments on… 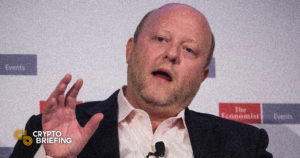 “Tornado Cash has repeatedly failed to impose effective controls designed to stop it from laundering funds for malicious cyber actors,” a statement from the Treasury said.  Treasury Sanctions Tornado Cash …

Chainlink (LINK) To Launch Staking On Ethereum On Dec 6th