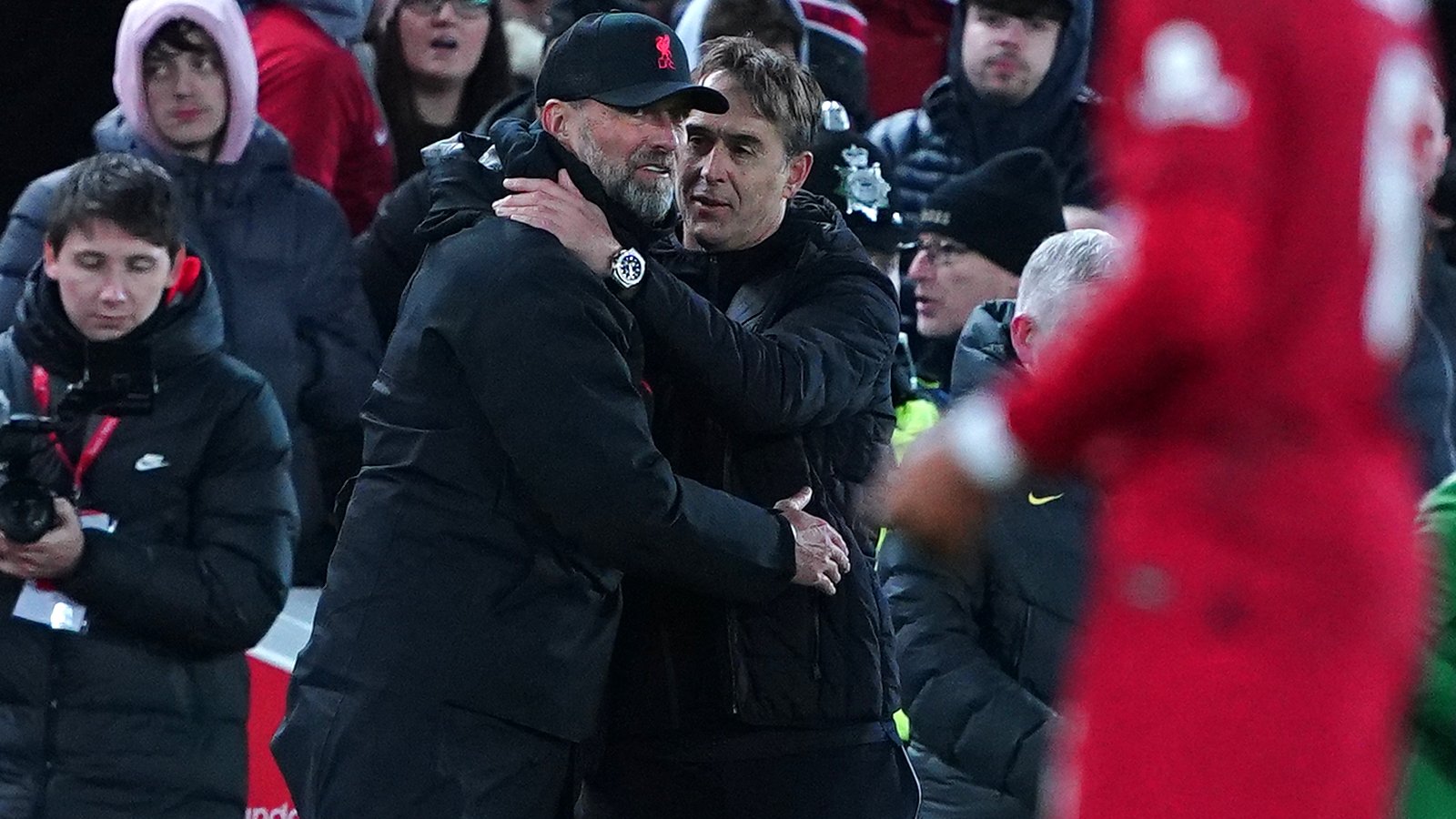 Jurgen Klopp hates replays. But the Liverpool boss ought to be grateful for the chance to go Molineux after the FA Cup holders flirted with elimination at the first hurdle on Saturday night.

The Reds were held by Wolves at Anfield where both sides provided plenty of entertainment but the hosts offered no reassurance whatsoever to their manager.

Klopp sought to swerve an unwanted addition to his diary by fielding his strongest possible team, featuring Cody Gakpo for the first time, against a rotated Wolves side that showed more cohesion and dynamism than the Reds’ regulars. Had Toti’s late winner not exposed a ridiculous VAR blind spot, Julen Lopetegui’s side would have been deserved victors.

A replay is a nuisance, but it is far from Klopp’s biggest problem. That would be his midfield. Or perhaps his defence. Whichever the manager decides is his greatest concern, he will have to address both to properly halt Liverpool’s slide.

Virgil van Dijk has hardly been his best self this season but the Dutch defender still leaves a gaping hole in his absence. Klopp attempted to fill it by pairing Joel Matip with Ibrahima Konate and while neither made the kind of glaring individual error that littered the latter’s performance at Brentford on Monday, as a unit, the back four was too easy to play through, over or around.

The centre-backs left the gaffes for the goalkeeper when Wolves opened the scoring. The first mistake was Thiago’s, with his failed step-over, but the midfielder recovered to poke the ball back to his goalkeeper. Then, inexplicably and under no pressure, Alisson passed the ball straight to Goncalo Guedes, who gleefully rolled the ball into the empty net.

When goalkeepers are willing to pass out from the back, there is an acceptance that mistakes will happen, but this one was too inexcusable just to brush off as an inevitable consequence of the way Liverpool play. Of course, Alisson has plenty of credit in the bank, but it seems the Reds’ jitters have spread to their most reliable player.

Liverpool went in level when Darwin Nunes calf-ed in Trent Alexander-Arnold’s sublime half-volleyed pass, and they were ahead shortly after the break when Mo Salah took full advantage of a flaw in the offside law. In days not so long ago gone by, that would have soothed Liverpool and the screw would be turned tighter. Now, there is no confidence the Reds can retain whatever lead their forwards forage for them.

Wolves continued to be probe and play through the Liverpool units. One simple pass took them all out and put Rayan Ait-Nouri through on goal, but Alisson blocked the shot.

The next one went through the Liverpool keeper. It would be harsh to say Alisson was culpable for Hwang Hee-Chan’s leveller – the ball found the net courtesy of a fortunate ricochet off the Wolves forward, but those in the front of the Brazilian stopper certainly failed in their duty of care for their goal.

‘They walked into our box,” moaned Klopp afterwards. You could be forgiven for thinking he was speaking literally, such was the ease Wolves had the Reds retreating. It certainly wasn’t an isolated case.

Klopp might have had mixed feelings over the sight of Matheus Nunes coming off the bench to ransack his engine room. The Wolves midfielder caught the eye in a half-hour cameo that showed Liverpool both what they could have won and what they still might. If Klopp was keen on Matheus before tonight, the Portugal international’s performance will only have served to heighten his desire to right a wrong from last summer, when Liverpool were determined only to sign the right midfielder, before later borrowing Arthur.

Matheus Nunes completed more take-ons than any other player on the pitch (3) and as many as the entire Liverpool team COMBINED.

He only played 27 minutes. 🩰 pic.twitter.com/RGnQYv7plU

Another sub, Naby Keita, was arguably Liverpool’s most eye-catching midfielder after he replaced Jordan Henderson for the final quarter. Keita did that thing he does occasionally, putting himself about enough to make you wonder if he might have a future at Anfield after all. None of us, Klopp especially, should be sucked in. But Klopp has to find a solution somewhere. It would be negligent not to at least try in favour of making do for now.

READ:  ‘The best player on the pitch’ – Eintracht Frankfurt star Filip Kostic was linked to Arsenal and West Ham in January but stuck around to help sink Rangers in Europa League final

We have to assume Klopp and his board haven’t blown the January kitty on Gakpo when there is such an obvious weakness elsewhere in the squad. Certainly not if they hope to salvage the season.

What of Gakpo on his debut? He was… quiet. Which is understandable so soon after joining from PSV. Gakpo won’t offer Liverpool an immediate answer to their problems. Klopp knows that. But the manager needs to come up with other solutions sooner rather than later.

How to watch the 2023 Grammy Awards