In the 1994 midterms, halfway through Bill Clinton’s first term Democrats lost both the House and Senate, giving the GOP the House majority for the first time since 1954. Conventional wisdom had it that Republicans won because they nationalized the race six weeks before election day with their “Contract With America,” written by soon-to-be House Speaker Newt Gingrich of Georgia and his right-hand man, Rep. Dick Armey of Texas. Whether that was really responsible for the victory is open to interpretation — Clinton was very unpopular at the time — but it was a novel strategic approach and the political media ate it up, lending the contract an almost mythic status.

It was an interesting document, based in part on Ronald Reagan’s 1985 State of the Union address and made up of various culture-war slogans and longstanding conservative policy goals. The GOP promised to implement a slew of procedural changes to how the House would be run, from changing seniority rules to cutting committees. After 40 years of uninterrupted control, it was like a political earthquake.

But the Republicans’ contract featured much more than that. They promised floor votes on 10 major policy changes within the first 100 days, a list that included all our favorite right-wing policies of yesteryear: tax cuts (of course), term limits, a balanced budget requirement, tort “reform,” welfare “reform” and the biggie, “entitlement reform.” Most of those things didn’t pass the Congress in any case, or were vetoed by Clinton, but that was beside the point. It was the beginning of the right’s “performative politics,” which continues to this day.

Their most audacious performance came when Gingrich decided that his best bet to ensure Clinton would lose re-election in 1996 would be to shut down the government and blame the president for it. This wasn’t the first time the government had been shut down over budgetary matters. It had happened several times since the 1970s over various policy differences — but this one was deliberately engineered for strictly political purposes. Gingrich and the Republicans sent Clinton a budget that committed the federal government to balance the budget within seven years and drastically cut environmental regulations. They purposefully stepped on the third rail of American politics by proposing to raise Medicare premiums. Clinton vetoed it, of course, and the standoff began.

After a couple of false starts and failed negotiations, nearly the entire federal workforce was furloughed from Dec. 16, 1995, to Jan. 6, 1996, the longest shutdown in history up until that point. Reports of national parks being closed, government offices being shuttered and thousands going without pay at Christmas took their toll. But the most damning story of all came from Gingrich himself. NPR reported:

According to the polls Republicans quickly bore the blame for shutting the government down. Their hand was weakened when Gingrich told reporters he had forced a shutdown in part because the president made him exit Air Force One by the back door after returning from the funeral of slain Israeli Prime Minister Yitzhak Rabin.

That poorly thought-out comment resulted in this famous front page. 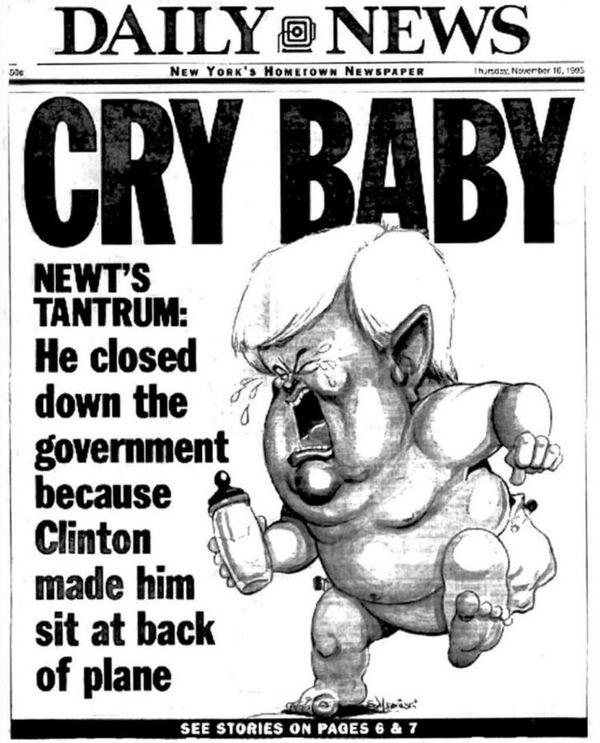 Clinton easily won the election in 1996 (over Sen. Bob Dole, by contemporary standards an entirely “mainstream” Republican) largely because the GOP had been tainted by such shenanigans.

Did Republicans learn from that debacle? They did not. They shut down the government under Barack Obama in a 2013 standoff over raising the debt ceiling, risking a default on government debt and the potential destruction of the government’s credit rating, this time over the Affordable Care Act. That did not work either. The New York Times reported at the time that “the shutdown sent Republican poll ratings plunging, cost the government billions of dollars and damaged the nation’s international credibility.” Yet another award-winning performance by the Republicans.

Fast forward to December 2018, and this time it was a Republican president, after having decisively lost the House in that November’s midterms, who engineered the longest government shutdown in history with his petulant demand that Congress fund his ridiculous border wall or else. Democrats refused and the GOP lost that one too.

I guess they just love losing. Republicans are already planning to do it again if they take the majority in November. Rep. Jason Smith, the Missouri Republican who hopes to be the next chair of the Ways and Means Committee, told Axios that Republicans plan to demand that President Biden reverse all his “radical” policies or they will refuse to raise the debt ceiling. “If Republicans are trying to cut spending, surely [Biden] wouldn’t try to default,” Smith said. “If we were trying to bring down inflation… trying to secure our border, surely he wouldn’t default.”

Other equally radical Republican leaders think the nation is eager to take on that old perennial: “entitlements.” The Republican Study Committee has a plan to raise the retirement age to 70, punish those who retired early and, you guessed it, start on the path to privatizing Social Security. I guess it’s time to roll that out again. It’s been 16 years since they last got their asses handed to them for trying.

Why do Republicans think the public will fall for this pathetic gambit this time around? Maybe they just don’t care: Most of them have totally lost the plot and just want to blow stuff up.

I don’t know why they think the public will blame the Democrats this time when voters never have fallen for this pathetic gambit before. I also suspect they really don’t care anymore. Most of them have totally lost the plot and just want to blow stuff up. But assuming they don’t succeed in causing a global economic meltdown with their silly game, they will have to face the voters again in 2024 on a record of trying to cut Social Security and Medicare, something that their “favorite president” — the one who still hopes to get back to the White House, despite his legal problems — was savvy enough to avoid.

READ:  A Throwback Thor Cameo in Loki Is Our First Love and Thunder MCU Tease

Even so, Democrats need to nip this in the bud. The world economy is already unstable and teetering on the brink of recession, and this debt-ceiling ploy is dangerous even in the best of times. If Democrats lose one or both houses of Congress in November, they must raise the debt ceiling in the lame duck session after that — and raise it enough so they don’t need to do it again anytime soon. In fact, the debt ceiling should really be eliminated altogether — it should not be a matter of negotiation whether or not the government pays its bills.Until that’s resolved, Republicans will continue to use this failed tactic, which apparently makes them feel good for some reason. They never gain from it politically, but at some point this stupid brinkmanship could tip over into a real disaster.

Donald Trump has been loudly demanding that Senate Minority Leader Mitch McConnell sabotage Biden’s agenda by refusing to raise the debt ceiling, so the ex-president is apparently all for going to DEFCON 1, even though that didn’t work for him the first time. But despite all the hand-wringing about Trump demolishing our norms and rules, this particular destructive tactic wasn’t his idea. It was weaponized long ago by those “normal” Republicans from back in the day, the ones who are now valorized as the loyal opposition who worked across the aisle in good faith for the good of the country. Trump wasn’t the first chaos agent by any means. He was just following their lead.