It’s here! The Husqvarna TX300 two-stroke is available now and we have one. This has a completely new motor with throttle body fuel injection. We’ve been going nuts waiting for this bike and it actually arrive sooner than we expected.

So it’s only been five years since Husqvarna and KTM came out with their first EFI two-strokes, which were all transfer port injection. Now, they’ve gone back to throttle body injection, which seems to be older technology. Does that mean TPI was a failure? Husqvarna’s people say no and point out that TPI is still used on the TE300. The nature of that design provides a very smooth power delivery, which is perfect to the more trail-oriented TE. In the last five years, both designs have been in continual development. Now, throttle body injection has developed to the point that it comes closer to the original goal, which is a more carburetor-like power delivery. That translates to a more aggressive nature, which is appropriate for the TX300, a cross country race bike. It also solves the problem of how to lubricate the crankshaft. With TPI, oil injection was necessary. By moving the injectors upstream, the crank and rod bearings are lubricated by oil mixed in the gas, which seems to be the way two-stroke purists like it. Setting the issue of fuel-injection aside, the rest of the motor is new, too. The electronic powervalve is now controlled by the same CPU that alters the fuel mixture and the spark advance. It has to be the most complicated multidimensional map ever.

Like most of Husky’s new bikes the TX300 got a new frame, although it is different from the one used for the four-strokes. We think it must be lighter because the TX300 didn’t gain weight like all those other bikes. On our scale without fuel, it weighs 224 pounds, which is the same as last year’s version. The suspension is basically the same as that used by the motocross bikes, just revalved for off-road use. It has slightly less suspension travel than its KTM counterpart (the 300XC). That’s to reduce seat height. The TX300 has about a half-inch less seat height than the KTM. 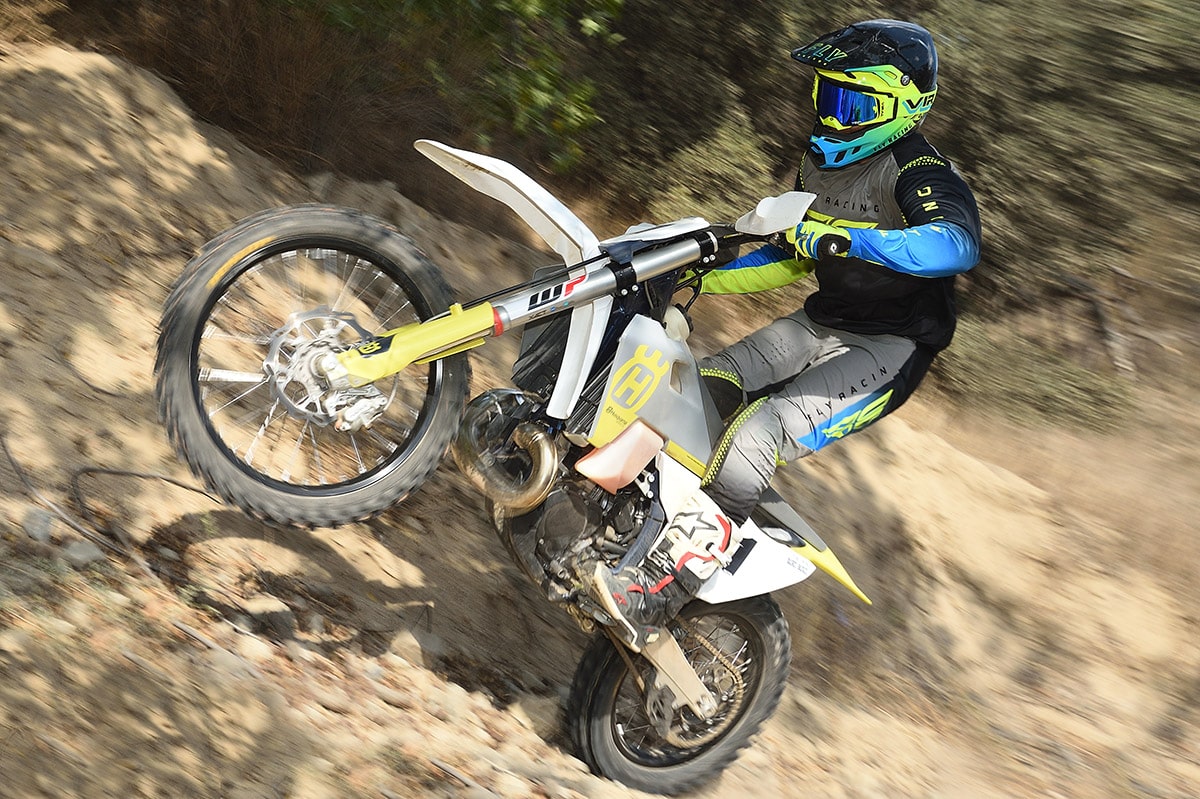 You can tell from the first time you open the throttle that something is different with this bike. It barks! The power delivery is right now when you gas it. There’s no spool-up time, no waiting for it to clear its throat. As advertised, it feels sort of like a carbureted motocross bike–but not quite. Most carbureted MX bikes that we’re used to are 250s, which can be a handful with kind of an on-or-off nature. The TX’s extra displacement makes it much more controllable. It is more powerful and more aggressive than last year’s TPI TX300, but it’s very manageable and responds well to partial throttle openings. 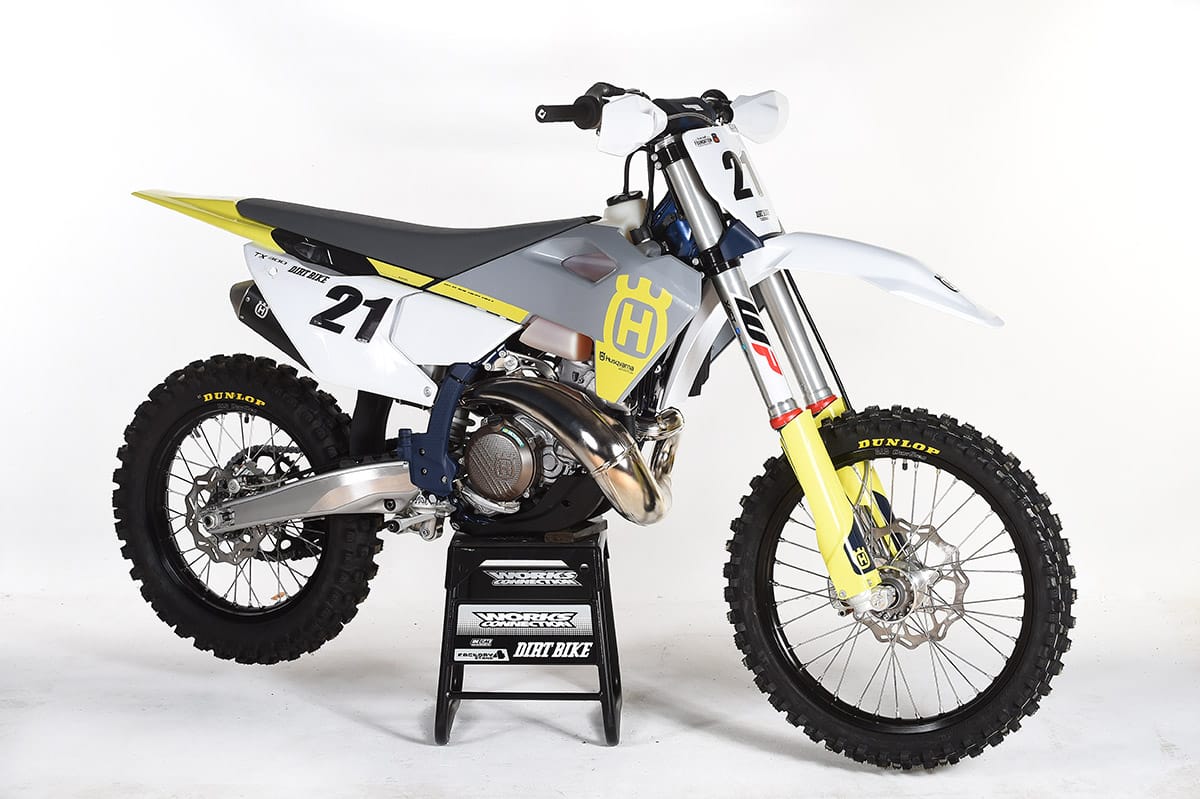 One aspect of the new TX300 is just like last year. At low rpm, it’s unstoppable. You can take it to the gnarliest, rockiest uphill and let the revs drop to idle speed without issue. It won’t stall unless you make it stall. Even a TPI bike will load up somewhat if you ride continually at such low rpm. The TX 300 is always clean. Likewise, an older Husky 300 will surge and even detonate slightly in some situations, particularly when they get hot. The new motor always is spot on as far as fuel mixture goes.

We’ve finally come to terms with the new Husqvarna frame and appreciate its strengths and weaknesses. It’s stiffer, which results in a negative first impression, based purely on comfort. After you ride it a little longer, you realize that it’s more stable at speed and has less chassis movement. It still initiates turns with very little effort and has less squat under acceleration. Plus, we’ve learned once you get more time on the frame, it loosens up a little and the rigidity becomes less of a factor.

We still like the TX’s suspension overall. It handles big impacts extremely well and you can fiddle with the air fork to your heart’s content. But, if the TX has any real room for improvement, it’s in the suspension department. We know there are a number of aftermarket kits and tuners who can improve both the front and the rear.

We’re pretty sure the Husky TX300 is the prototype for all two strokes moving forward. We know we are facing big political challenges in the near future, but at this point, two-strokes and four-stroke are more or less in the same boat. The fact remains that two-strokes are so important to Husqvarna that development has been nonstop. The TX is an undeniable improvement, and we are certain that it came with a substantial investment. The full test of the 2023 Husky TX300 will be in the January, 2023 print edition of Dirt Bike.

24 HOURS OF GLEN HELEN BY THE NUMBERS 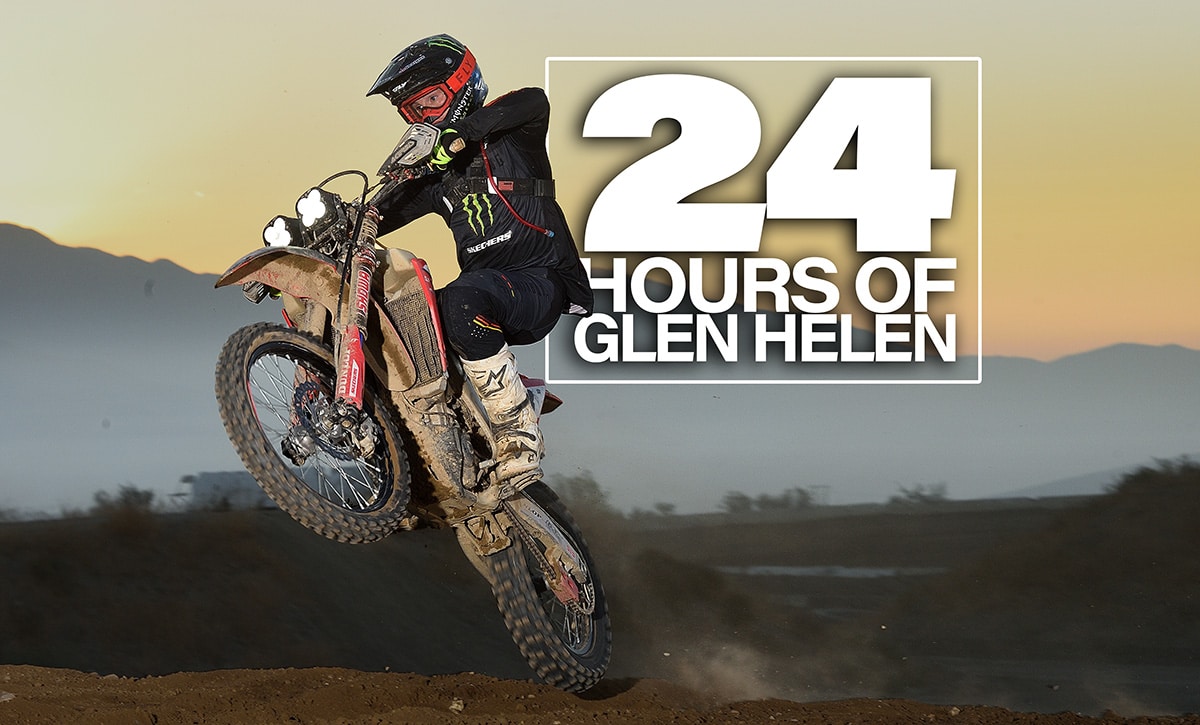 The Stats are In!

Take a look at these overall stats of our 24-Hour Endurance Race!

ONE LAP AROUND THE 24 HOUR COURSE

Nowadays I work on the 24 hour course each year and I’m exhausted by the time the race actually starts. I used to race it too. About 20 years ago I was on a team of legends that I was especially honored to ride with. All these guys are my heroes. 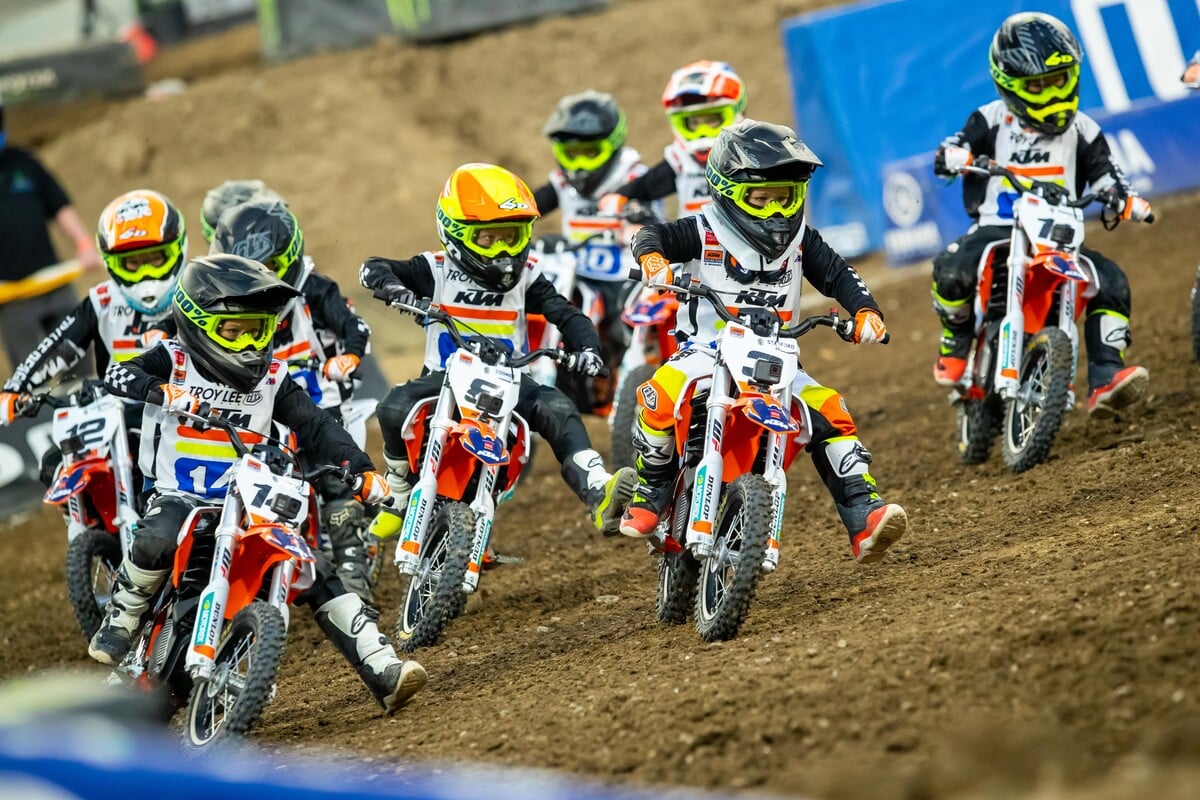 The KTM Junior Supercross, presented by Wells Fargo is ready to race into its 24th year with the AMA Supercross Championship in 2023. Announcing an exciting 10-race series, with an 11th “Championship Round” at the series finale, KTM North America, Inc. is pleased to continue providing an exciting and action-packed introductory platform for our future Supercross stars.

Continuing to lead the charge in innovation in 2023, participants will race aboard KTM’s all-electric mini-supercrosser – the KTM SX E-5 – on the global stage under KTM’s solar-powered semi. The 3.9-kilowatt powered KTM Junior Racing semi is equipped to power the entire semi on race day, including the 15 purpose-built charging stands, thanks to its 30 rooftop solar panels.

For the upcoming season, applicants will be randomly chosen for the KTM Junior Supercross program and treated to a once-in-a-lifetime experience throughout the day, including a track viewing like the pros, two practice sessions, participation in Opening Ceremonies and a three-lap exhibition race on the very same tracks as their Supercross heroes. The 10-round schedule will kick off at the series opener in Anaheim, California on January 7, making stops at many familiar stadiums on the tour, while introducing all-new locations such as Snapdragon Stadium in San Diego, California and Nissan Stadium in Nashville, Tennessee. At the end of the 10-round schedule, the winners from each individual round will be selected to participate in the ultimate “Championship Round” at the series finale in Salt Lake City, Utah on May 13.

Wells Fargo continues to be the supporting partner for the program, returning for the third year. To further add to the excitement, longtime brand partner and Official Gear and Helmet of the KJSX program, Troy Lee Designs, returns for its eighth consecutive year as very generous supporting sponsor, providing premium protection for the “World’s Fastest Racers.”

Registration is now open for the 2023 KTM Junior Supercross, presented by Wells Fargo. Interested applicants must be 7-8 years old and meet the full requirements listed in the official rules. All rules and registration deadlines can be found at www.ktmjrsx.com.

See you next week!