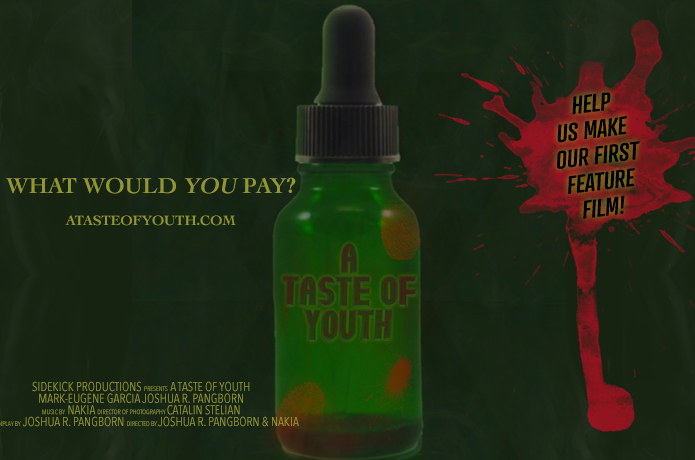 New York, NY, June 05, 2022 –(PR.com)– SideKick Productions – the internationally-acclaimed queer, fat- and sex-positive production company- is set to start production on their first feature film: A Taste of Youth. Inspired by their award-winning short film, Wasted on the Young, A Taste of Youth will be the world’s first queer, fat-positive horror feature. Production is slated to begin in June, and to help fund their efforts, SideKick Productions is currently running a fund-raiser through IndieGogo at www.atasteofyouth.com. Donors who help fund the film can find several different tiers to offer their support in return for a variety of perks, including limited-edition enamel pins, T-Shirts, and even a Producer credit.

A Taste of Youth is the story of Mateo on the eve of his 46th birthday. Facing an uncertain future at work, and anxiety towards aging and the changes he’s going through because of it, Mateo finds himself growing despondent and realizing he’ll do whatever he must to change his lot in life. Confronting issues of toxic masculinity, aging, and body image through a queer, horror lens, A Taste of Youth touches on visceral fears to which we can all relate. Follow @atasteofyouth on Instagram and Twitter.

A few words from Joshua R. Pangborn: “With five seasons of Skeleton Crew, and the first seasons of Demon Doctor and Ashley Monique Menard’s The Art of Blowing It, we’ve produced almost 40 hours of television. And while we have many more seasons of shows (old and new) to come, it felt only natural that we delve into making our first feature film. I’ve always been drawn to horror films and the way they can be so relatable regardless of how fantastical they may be. A good horror film has the potential for the ultimate catharsis of pity and fear—the Greeks knew this and emulated it in their greatest tragedies. For myself, the genre also offers a great deal of opportunities to try new things. Explicitly queer horror is still a relatively untapped sub-genre, and fat-positive queer horror is practically nonexistent in film and television. With A Taste of Youth, I knew I wanted to celebrate all the things which people have come to expect from SideKick Productions, and push them further. Someone mentioned to me after reading the script they were concerned I might not have enough ‘straight people’ in the film. I told them I didn’t care about meeting a quota of straight characters, and that’s true—the more I create, the more I want to focus on queer, fat stories.

“Nakia and I have assembled an incredible, mostly queer cast and crew and we are going to tell a story which I think will really speak to the audience about very familiar fears. I’m also extremely excited that we will be featuring an openly asexual character in a leading role, which is representation that is sorely lacking in most media. The chance to collaborate with Catalin Stelian on a feature film has been a hope of mine for a few years now, and I’m thrilled he is going to be behind the camera on this project. And filming this movie is going to be like being at a family reunion since so many of the cast and crew are frequent Crewniverse collaborators (though we are also joined by some amazing new faces in front of and behind the camera). And we will be featuring special effects from the award-winning Paul Antzoulis, and Nakia will be scoring the film. Nakia is also joining me as co-director on this project—I knew if I were going to reprise my role alongside Mark-Eugene’s Mateo, I needed someone I could trust to help direct—Nakia, with all of his passion and drive, was the perfect choice.

“A Taste Of Youth will be one of the most intense projects I’ve ever worked on, but I’m so excited to be making it happen, and I’m so grateful I have the chance to do so with my family from the Crewniverse. I hope people will see value in the work we are doing and support us through our IndieGoGo campaign (www.atasateofyouth.com), or by becoming a patron at our Patreon (www.patreon.com/sidekickproductions), but whatever the outcome, I know the work we are doing is important because we need queer, fat-positive films, and if other people are not going to make them, then it’s up to us!”

A few words from Nakia: “Growing up I was the kid at the magazine counter reading Fangoria every week while my mom shopped for groceries. The instant I had my own money I started buying them, unlocking a fascination with a world of terrifying horror and fantasy that still lives inside me today. So, when Joshua asked me to co-direct his first feature film I was not only incredibly honored (and scared to death), but I was thrilled the genre would be horror.

“Getting to work with Joshua on this project has been a learning experience, and I am really looking forward to writing and recording the score for this film. I’ve been watching to a lot of old school horror films prior to production and feeling really inspired by the music of Charles Bernstein, Tobe Hooper, Howard Shore, and Krzysztof Komeda.

READ:  First Footage From The Last Of US TV Show Released

“I’m very proud of the wonderfully diverse cast and crew we are working with on this film and looking forward to sharing this dark and mysterious story with the world.”

About Joshua R. Pangborn:
Writer/Actor/Filmmaker Joshua R. Pangborn is known for his work on Skeleton Crew, Demon Doctor, and The Art of Blowing It. He’s been awarded for his work on all three shows, behind the camera and in front, in festivals around the world, most recently being named Best Supporting Actor in a Comedy at the 2021 NJ Web Fest for his work on The Art of Blowing It. A resident of New York City, Joshua is a passionate storyteller focused on telling queer stories with a fat-positive and sex-positive emphasis. Pangborn knew if the world was not going to tell the stories he wanted, he was going to have to tell them himself, and so he founded SideKick Productions in 2010.

For over 25 years Nakia has been a professional singer, songwriter, composer, actor, and artist advocate. During that time he’s been a touring Blues/Soul band leader, a Cabaret style singer accompanying himself on piano, an actor in several musicals, plays, and workshops, and in 2011 he became a “fan favorite” on NBC’s ‘The Voice’ where he was a semifinalist making it all the way to the penultimate episode of season one.

Nakia has had the privilege of working with some incredible artists such as Sharon Jones, B.B. King, Rebecca Luker, CeeLo Green, The Muppets and the honor of being a student of master storyteller Betty Buckley. In 2018 Nakia began composing for film (Wasted On The Young) and TV (Skeleton Crew, Demon Doctor). He’s also acted in several of these productions. During the pandemic he recorded and released a 15-song musical called Dueling Pianos co-written with Skeleton Crew creator, Joshua R. Pangborn. Nakia serves on the Board of Governors for the Texas Chapter of the Recording Academy. He is the founding President of the musician advocacy nonprofit, Austin Texas Musicians, and is a two-time Black Fret grant recipient. Nakia lives in Austin, Texas with his husband Robert and their Bouvier, Baker.

SideKick Productions was founded by Joshua R. Pangborn in 2010 as a theatre company focused on size-blind casting and telling queer stories. In 2015, the company moved towards New Media with the release of their flagship series, Skeleton Crew, which has accumulated hundreds of thousands of views and a number of awards and nominations, including most recently being awarded Best LGBT Series at the 2021 British Web Awards and Best Ensemble at the 2020 NZ Web Fest. Skeleton Crew tells the story of Pangborn’s Anthonyand his husband, Hunter (played by J. Cerio), a polyamorous gay couple navigating their lives alongside family and friends in a celebration of all things queer.

READ:  U.S. Open: For Thomas, honesty is a costly policy

In 2019, SideKick Productions released two new series, Demon Doctor and The Art of Blowing It. Pangborn’s Demon Doctor has captured the international circuit as well with its unique take on horror comedy through a queer, fat-positive lens and led by Mark-Eugene Garcia, Ashley Monique Menard, and Pangborn as the titular Demon Doctor, winning a slew of awards. A cross between Buffy, The Vampire Slayer and The X-Files, Demon Doctor follows the adventures of Detective Mark Besim and Doctor Derek Jedial as they try to protect the city from a world few are even aware of. The Art of Blowing It, from the mind of Ashley Monique Menard, features Menard as a former child star trying to reclaim her fame by living her life as a reality series helmed by newcomer Felix Ziegfeld (Pangborn). Named Best Mockumentary by both the NJ Web Fest (2021) and Minnesota Web Fest (2021), The Art of Blowing It is a hilarious romp.

Other works by SideKick Productions include the award-winning short horror film, Wasted On The Young, the horror short, Yaas, Queen, Slay, and their latest short horror release, Scratched. Find out more about SideKickProductions and follow their journey at https://patreon.com/sidekickproductions. To help fund their first feature visit www.atasteofyouth.com.

EA’s Onrush is losing its online features in November

Bioeconomy and carbon neutrality: ‘Without further investments we will miss the target’

January 6 Was a Dark Day for America. But Can Democrats Win by Running on It?

ECB’s Visco: Significant worsening of economic outlook is cause for concern