Tomas Soucek’s second-half equaliser helped West Ham to come from a goal down to earn a 1-1 home draw against London rivals Tottenham.

Spurs had a penalty overturned in the 15th minute following a lengthy four-minute VAR check that deemed Harry Kane’s header to have hit Aaron Cresswell’s head instead of his hand.

It was a decision that incensed Tottenham head coach Antonio Conte who called for VAR to be “cut off”, while Moyes admitted the overturn “completely changed” the match as it gave his side a “better foothold”.

Man of the match: Tomas Soucek

Despite the decision, Spurs eventually went ahead in the 34th minute when Hammers defender Thilo Kehrer turned Kane’s low cross into his own net following a lightning-quick counter-attack.

But the home side equalised 10 minutes into the second half through Soucek after the midfielder smashed past Hugo Lloris following a clever Michail Antonio flick.

West Ham pushed for a winner as Pablo Fornals blazed over from Vladimir Coufal’s cross, while Jarrod Bowen’s last-minute near-post hook dangerously flashed across goal without a Hammers player on the end of it.

Spurs held on to maintain their unbeaten record this season and stay third, while West Ham took their first home point of the new campaign having lost their opening two games at the London Stadium.

How West Ham fought back to deny Tottenham

West Ham looked like they had conceded a penalty for a third consecutive home league match when Spurs were awarded a spot-kick in the 11th minute, only for referee Peter Bankes to overturn his original decision after a lengthy four-minute VAR delay. The official eventually using the pitchside monitor and deeming Kane’s header to have hit Cresswell’s head instead of his hand.

Antonio came close to breaking the deadlock but saw his superb curling effort hit the post in the 22nd minute after linking up well with Said Benrahma.

Tottenham opened the scoring 12 minutes later with a fast counter-attack led by Dejan Kulusevski, who carried the ball to slip in the overlapping Kane on the byline. The striker’s cross then forced Kehrer to put through his own net with Heung-Min Son waiting.

West Ham equalised in the 55th minute thanks to Soucek’s thumping finish. The Czech Republic international latched onto a clever ball from Antonio who had been picked out by a quick Coufal throw-in to rifle past Lloris.

David Moyes’ side then looked the likeliest to win it as Fornals wasted a great chance before new club-record signing Lucas Paqueta from Lyon, who came off the bench for his debut, failed to connect with Coufal’s ball in a mix-up with fellow substitute Emerson Palmieri.

The Hammers nearly took all three points in the last attack of the game but no West Ham player could get on the end of Bowen’s effort across goal that would have given the east London side their first home league win of the season.

Man of the match: Tomas Soucek

“This was a timely performance from West Ham’s midfield battering ram. Things have not really clicked for Soucek so far this season with his passing and inability to move the ball quickly being labelled as one of the key reasons why the Hammers have started this campaign slowly.

“But that is not Soucek’s game. He is all about causing chaos in the box with his driving runs which add to West Ham’s goalscoring threat. Moyes loves to play with difference makers like Soucek and his decision to keep the midfielder in his starting XI certainly reaped reward with the midfielder hauling the Hammers back into the match at a key time.”

READ:  Valentina Shevchenko shows off her sixth ruby on her UFC championship belt

“A draw is a good result, but ultimately we would’ve liked to have won it.

“But there’s parts of the game where Tottenham were very good but I think after the opening 10 or 15 minutes probably the turning point was there was a penalty going in our favour.

“I think the game completely changed. We slightly altered how we started and it gave us a better foothold in the game and we played much better.

“The ability Tottenham have with their forward players is immense so you’re always on a knife’s edge with them.”

“I’m seeing us just beginning to get a little bit of rhythm going a little bit, try to introduce some of the new players. We’re trying to build towards a new side and building a new team.” 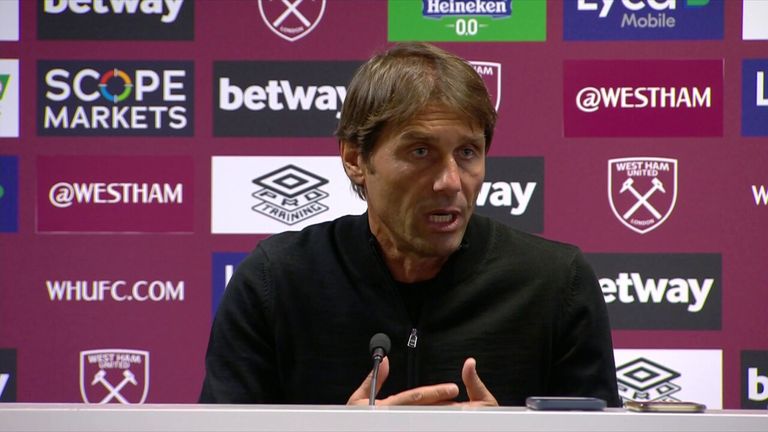 Tottenham head coach Antonio Conte says it is ‘incredible’ that mistakes are being made by VAR, after he saw his side’s penalty overturned against West Ham

“I think we had the opportunity to get three points today and for this reason we have to be a bit disappointed for the final result on one hand.

“On the other hand, I think that it is not easy to play against West Ham, especially in this stadium with this atmosphere.

“But you can pay attention over 95 minutes, but only once you don’t pay attention, and you concede a goal that you can avoid because we conceded a goal that we could avoid and in the end, one point is good especially away against West Ham.”

West Ham get back to the West Ham way

This felt like the West Ham we have become accustomed to under David Moyes. After a slow start against Tottenham, they kicked into gear with an aggressive and dangerous performance. That energy and bite got the crowd involved at the London Stadium – an absolute must for a home team in a London derby of this magnitude.

It’s not easy to play against West Ham,” Tottenham boss Antonio Conte remarked afterwards. That is usually the case but that edge and conviction in West Ham’s play has been missing so far this season with Brighton and Nottingham Forest taking maximum points off them whilst although the result was good in their 1-0 win at Aston Villa there were still huge flaws in their rhythm and chemistry. That returned here as the Hammers grew in stature as the game wore on. In this was a 100-minute game rather than 90, then West Ham would have been a fair bet for stealing the points.

Tomas Soucek was back to his battering-ram best, Michail Antonio chased lost causes and provided the platform for West Ham to build from and Declan Rice was his usual calm, collected and classy self in midfield. You would be hard pushed to find a better spine than that in the Premier League when all are on song. When you throw Moyes’ new additions into the mix – Lucas Paqueta was introduced on 67 minutes and added extra spark – there is certainly more hope for another exciting season than what it seemed a few weeks ago.

West Ham have another London derby as they face Chelsea at Stamford Bridge on Saturday at 3pm.

Tottenham also have a 3pm kick-off on Saturday as they host newly-promoted Fulham.

‘RHOM’s Marysol Patton Teases Major Drama Amongst The OGs In Season 5: ‘It Gets Ugly’ (Exclusive)

These are the best travel photos of 2022

This Adorable $7 TikTok Find Is The Ultimate Stocking Stuffer