Once you see it, it’s too late…

Do you remember those creepy chain texts we all used to get between the ages of 12-14? They all said something along the lines of “forward this text to 10 people or a bus will run over your mum.”

And although most of us were smart enough to know that these texts were not genuine harbingers of doom, that’s not the case for the unfortunate cast of Smile. Mostly because the curse that haunts them isn’t quite as easily ignorable

In the world of Smile, the curse begins once someone takes their life in front of you. And you’ll know it’s a cursed suicide through its creepy giveaway— a spectacularly gory death accompanied by a chilling rictus grin. The entity causing these problems thrives through spreading trauma, so it perpetuates the cycle and acquires new victims by driving each of its unfortunate hosts to foist the curse onto others.

That’s what happens to Rose Cotter (Sosie Bacon), a therapist whose genuine passion for mental wellbeing stems from the childhood trauma of witnessing her mother’s suicide. So, when Rose meets Laura— a PhD student whose life is ravaged by horrifying hallucinations— Rose really believes she can help… right until the moment Laura takes her life in Rose’s office.

Laura’s suicide transfers the curse to Rose, who is suddenly haunted by delusions of her own. Drawing parallels with The Ring, It Follows, and others in the same vein, Smile presents a portrait of a life unraveling at the whim of a malevolent parasite that’s impossible to shake.

Once Rose is afflicted with the curse, everything about her reality is up for grabs. An apparent break-in at their home triggers a call from the alarm company— one which features a sinister voice whispering, “Are you sure, Rose? Are you sure you didn’t let something in…?”— followed by the real call, which reveals that the sinister voice was a hallucination, that Rose had not yet picked up the phone. 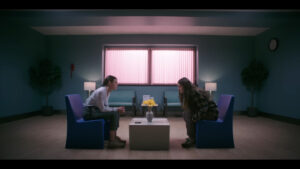 This hallucination soon gives way to others— a late night spent reviewing the audio of Laura’s suicide is disrupted by a jump-scare spectre that had me dumping my popcorn into the next row and sends Rose scrambling for a knife, with which she nearly attacks her oblivious fiancée (Jessie T Usher).

These jump scares and Dutch angles which are integral to Smile’s style are neither subtle nor groundbreaking but they are effective, especially when combined with the film’s jarring soundtrack and the lurid grey lighting which highlights Rose’s increasingly haunted, gaunt spiral into madness.

It is this spiral which makes me question the central premise at the heart of Smile— a horror movie which also attempts to be a commentary on mental health. Although it’s clear that Smile sees itself as quite a serious meta-critique on trauma and mental illness— a horror movie about a therapist wrestling with the horror of smiling through trauma— its success is ultimately questionable.

As Smile slithers towards its climax, the viewer, like Rose, is desperate for a reprieve from the curse, anxious to believe that healing can triumph over trauma and that Rose will be our final girl: scarred, traumatised, but walking into a brighter future. In fact, a couple of scenes set us up for this expectation, allowing Rose the opportunity to declare that her mind is her own, that she defines her reality, and she dictates the forces which hold power over her thoughts.

These moments— combined with Rose’s altruistic determination to ensure that the curse ends with her— set us up for the expectation that Rose will triumph over her trauma and that Smile might actually offer a worthwhile message about mental health. Unfortunately, however, Smile’s ultimate message is that trauma triumphs over all.

And, as someone who lives with PTSD, I had to ask myself if this is really the message we want to send— even with a horror film. No one expects horror movies to have happy endings nor do we watch them for feel-good vibes. But if you’re going to tackle heavy themes such as suicide, mental illness, and trauma, do you really want to end on the note that trauma wins? That no matter how hard you fight, how much you try, you will forever be a slave to the horrors of your own mind?

This message— combined with Rose’s role as a therapist and the scenes which show her working closely with traumatised patients— seem dangerous and ill-advised for vulnerable viewers. And although Smile’s ending was nasty, effective, and thrilling, I would have preferred to enjoy it in its own right as a horror movie where everything ends in stark terror than as a horror movie which also offers a bleak commentary on mental health.

Smile is an unsettling horror-melodrama that will stay with you long after the final credits, partly because of its disturbing take on mental health and trauma